I first got the idea for making a drag sled from a mobilityWOD video. Kelly had made his from a tyre filled with concrete, then later bought one made by rough fitness which is loaded with free weights. I then saw a few different sleds on The Crucible, Ross training and The Garage Gym Online. These were built with tyres, kid’s sleds, and sheets of metal. They were loaded with rocks, weights, logs, etc. A sled seemed like a great way to improve my leg power and a fun way to get an intense workout.
From seeing these various sleds, I decided I didn’t care how much weight was loaded onto it, what mattered is how hard it would be to drag - which isn’t always the same thing. More weight would need to be added to a kid’s sled to add fiction, than to an old tyre. So I decided my sled was to be a tyre and I would fill it with concrete then load weights on top as necessary, or just fill the tyre with rocks.
How to build the sled
A sled can be often made for free, tyre shops will likely give you old tyres, and then all you need is some rope and rocks.

First I needed a way to attach a rope, so I drilled out holes for a U bolt and attached that to the lower part of the tyre. If you don’t have a U bolt you could just push a short piece of rope through the holes and tie the ends off for the same effect (I suggest using a screwdriver to push the rope in).
Since I may later fill the tyre with concrete I decided to screw a piece of ply wood to the inside, I could then pour the concrete onto that, for now it keeps all the rocks in the tyre. First I marked the ply so I could cut out the size I needed; this was then cut in half so it would fit inside the tyre.
This next step was a pain in the butt because I’m such a perfectionist, and was under a time limit to get the sled finished (I failed at both these things, but I still ended up with a working sled). The ply and tyre had to be drilled then the ply bolted in place. I had trouble getting the ply to sit nicely and the bolts to line up (aesthetics only) so it took me a long time. There is still a gap between the ply, but duct tape will cover that if I decide to fill it with concrete. 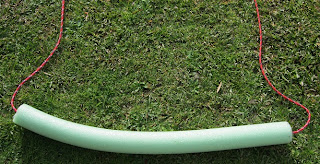 The final touches were to add a rope (padded with a pool noodle in the middle) and rocks for weight. With the amount of rocks I have in the sled it is too heavy for me to run with much speed (for now) but I can still drag it.

At first glance it may not seem it, but the sled is a versatile piece of equipment. Obviously there is the forward and backwards drag, but also standing and pulling the sled to you such as hand-over-hand, bicep or tricep curls (like a row). You just have to use your imagination. If you have enough room (30-50 meters) you could do repeats of the different drags and pulls until you can no longer move. You could even add body weight, kettlebell or sandbag exercises at each end of a drag if you really want to sweat (store the kettlebell or sandbag on the sled for max weight).
This sled can be put together in only 30 minutes or so. I hope you have fun putting together your own WOW, or WOD.
Posted by Blah at 22:09