The core is the most important set of stabilising muscles in the body. They are recruited when performing everything from simple movements like a push up or pull up to advanced moves like the planche. A strong core is vital for keeping good position in these movements and for simple activities like sitting in good posture. A solid core is also necessary in sports, particularly fighting such as MMA.
We all know sit ups are boring and not very effective, planks, v-ups, L-sits etc. all work well, are challenging and can be more interesting than sit ups. But variety is the spice of life, so when I came across ab rollers on Ross Training I decided to get a set.
Ross Enamait built his own rollers with pipe and lawnmower wheels (link). His ab rollers had the wheels on the outside and a handle on the inside. He uses these for standing roll outs and since each ab roller is one handed he can also use them for one arm roll outs which are impossible with the standard wheels in the centre design. He also uses them for pecs by rolling his arms out to the side from a press up position then rolling them back, like a fly. The video is here.
He also linked a video from a guy (second video) who bought 2 ab wheels where the wheels were in the centre and the handles on the outsides. He cut the grips down, shifted them to the centre and fixed the wheels to the outside with pipe clamps.
Since ab rollers can be found easily, are so cheap, and standing roll outs looked like quite the challenge, I decided to buy a pair and modify my own so that someday I might perform a one arm, standing roll out.
The ab rollers I bought were on trademe (New Zealand’s equivalent of ebay) for NZ$1 reserve. So two rollers shipped to my door was only NZ$11. The pipe clamps I bought were expensive at NZ$9.50 for four. And that was all I needed to buy, the whole project cost NZ$20 plus change.
I hack sawed the ends of the grips off so that they would slide into the middle, and the pipe clamps would fit on either side of the wheels. The two grips were then slid into the middle, wheels put on, then the clamps and I was done, ready to start rolling. 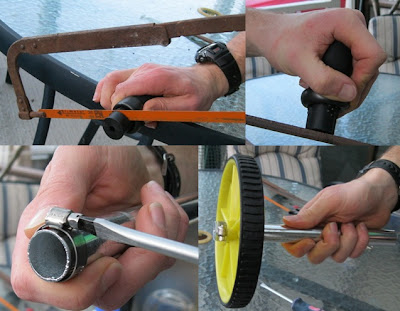 I gave mine a try outside (probably better used inside since the wheels are cheap – good for ad breaks). I only tried a kneeling rollout since my core is not yet strong enough for a standing rollout, but I’m working on it. 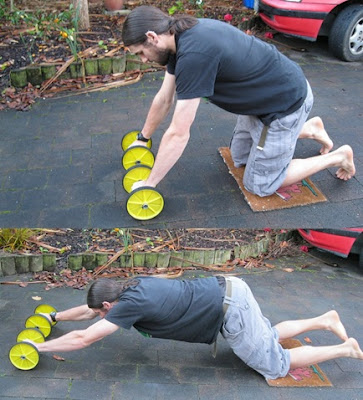 This won’t burn off fat around the belly and it won’t give you a beach body in 30 days or whatever rubbish they write on the box, it is however an excellent tool for building a strong core.
Posted by Blah at 18:17