This is a really fun alternative to regular pull ups, which I use from time to time. It challenges the grip, lockout and stability of the regular pull up. You can either, climb up and jump down, climb up and down (multiple times), or do pull ups/chin ups on the rungs. I got the idea to set up a rope ladder after seeing a video on YouTube where Matt Wichlinski makes a massive bachar ladder. It looked really cool, but I have nowhere to set something like that up (got some ideas in my head though). So I decided on making a short vertical climbing ladder. I thought about using some thick logs to challenge the grip, but didn’t have any around. What I did find was some old 60mm pressure pvc pipe. To buy it would have cost no more than $20, so it’s still quite a cheap build. I bought 6mm rope rated to over 300kg so two people could climb at once if they wanted too. I got 12 meters, enough to build 2 ladders and it was about $1 per meter. Sorry no step by step pictures, but it’s an easy build.

First you will need to measure how long you want your ladder. Since my pull up frame is 3 meters high, I was going to build my ladder about 2 meters long. This sets the lowest rung at a position where I can just pull my backside off the ground to start the climb from the lowest point, and get the most distance out of the climb. I cut off 6 meters of rope which gave me about 1 meter either side spare (some of which would get lost in tying the knots).

Next find the half way point of the rope and tie off a loop. I put a hook in mine for ease of hooking up to my pull up frame, but you could just have a loop and use a shackle or carabiner. Now you are ready for the rungs. I cut my rungs approximately 500mm wide; it’s not important how wide they are (300-500mm is find). I then drilled a 7mm hole (slightly larger than the rope) on either end of the pipe about 30mm in from the end. Try your best to line the holes up straight.

Thread the rope for your first rung, set the loop up in the centre of the rung so it will hang straight. Tie a knot approximately 400mm down from the loop on both sides. Hang the ladder up and check the rung is straight. Repeat the process of threading, tying and checking for each rung. I spaced out 5 rungs on my ladder but couldn’t use the bottom one when set up on my pull up frame so I took it off. 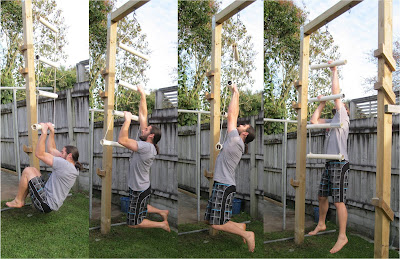