I first found out what a biltong box was only a few months ago from a friend who was building himself a second one. When he explained what it was all I could think was I can build one this weekend and start making biltong. It ended up being a few weeks before I got around to building one but I’ll back up first and explain what a biltong box is.

Biltong is a type of dried meat which originated in South Africa. It is made by cutting raw meat following the gain, which is cured in vinegar, salt and spices before drying. The drying box is simply a box with a light (for heat) and a fan for air flow. That’s the basics of it.

I did a bunch of Google searches to see how other people had built their biltong boxes and many of them followed my friend’s design and the one I eventually went with. Others were made from ply wood, and some were old tv boxes. The design I have used is build using plastic storage boxes.

The total cost of building the box was about $80, $35 of that being the fan. I chose to go with the more expensive 240v fan so that I could have the fan and light wired together instead of using a cheap 24v computer fan wired separately. Note: the light is a 60 watt bulb.

I borrowed a set of hole saws to drill out all of the holes, I set up 6 vent holes (someone suggested this might be too much air, I haven’t had a problem yet but I could experiment with closing two up). I also drilled out a hole for the light to be wired in and the fan to be mounted. Note: I set the light up very low to start with and my electrician later lifted the light higher (it’s now about 50mm off the bottom of the box) to prevent it from heating up the plastic too much, this has not been an issue at all. I also made some plywood brackets for the light and fan to mount against. They could have been mounted to the plastic box directly, but I had the ply and thought it would be stronger and neater. The only other holes needed were for the wooden rods to hang the meat. The vent holes were covered in an insect mesh which is taped on, I got the mesh from work but it is super cheap at any home store. Note the ply wood bracket for the fan is also covered in mesh. I have also taped around the wood doles to keep out any bugs. I’m not worries about nasty chemicals coming off the plastic, the box doesn’t keep hot and the meat doesn’t touch any off the plastic.

My electrician did an excellent job wiring it all up. I could have done it myself but didn’t want to risk electrocution or burning the house down. The build is really simple and took 1-2 hours total. 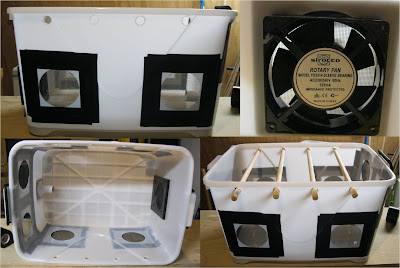 Following this I looked around for some recipes and went with the most simple I could find. I had my butcher cut me 1kg of silverside (NOT CORNED) approximately 3cm thick (this will seem very thick but its good) this gave me 4 slices. This was dipped in apple cider vinegar then spiced with rock salt, pepper corns and coriander (see photos for thickness of spice). This was dried for 4 days (its winter here and somewhat cold), the meat came out very slightly pink in the centre, I liked this, others said it needed to be drier, and some said perfect, so it’s really a matter of taste.

The second batch I ran was 2.5kg sliced about 1cm thick, I also ran out of spice. This batch taught me a few things: 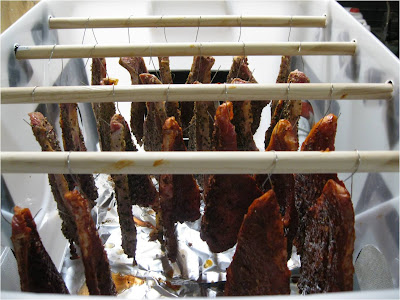 All done, I’m really happy with my biltong box, when I’ve finished this next batch I’ll start trying some different spices and maybe in future post some recipes.
Posted by Blah at 16:07