This post is on my home rock climbing wall/massive hang board which is still an ongoing project. Clearly it’s not a full rock climbing wall (I wish it was), but it’s a hell of a lot bigger than most hang boards. My original idea was to put up just a small hang board much like the blank slate boards, maybe a meter long to set up a few holds to work on my grip strength. The only problem was no one sells such small pieces of plywood. So I scaled up and decided use a full sheet of ply (18mm, $80 NZ) which would span the garage and leave me enough wood for a small campus board on the back side. Since I’m back at Uni I couldn’t afford the ply until my Mum offered to buy me a sheet for my birthday. When she suggested two sheets I jumped at the opportunity and the plan grew again. Now the plan includes a hanging section and a peg board, both of which only need time to finish. So this is what I’ve got finished do far, a four meter long section of wall to climb on and half the campus board.

The rock holds, t-nuts and bolts were all bought from Uprising holds; the total cost was about $200 NZ including all the extra t-nuts. The beauty of it is that I can easily take the whole this down and set it up in another garage.

The first thing I did was measured up for the wall. I measured down from the rafters 400mm and found I would be able to walk underneath without needing to duck, this would give me two cuts and three strips of plywood from each large sheet. These strips would be 400mm by 2400mm.

After cutting the sheets I drilled out the first board for the t-nuts, these were spaced 200mm apart horizontally and 100mm from the top and bottom of each sheet. I used a 10mm auger bit to give a nice clean hole (Tip: drill from the clean side through to the back, it’s ok if the back looks a bit rough). Once these were all drilled for the first sheet I hammered the t-nuts in from the back and the board was ready to go. At this point I realised that the bolts for the holds would stick out the back from the t-nut when tightened up so I was going to need to block the ply out from the wall to allow the bolts to stick out. I picked up some off cuts from work; these were 20mm thick and 50mm wide. I used these to line the rafters in positions that would not block the bolts from sticking out the back of the t-nut (I hope that makes sense since I don’t have a picture of it). These were screwed in with small gauge screws. 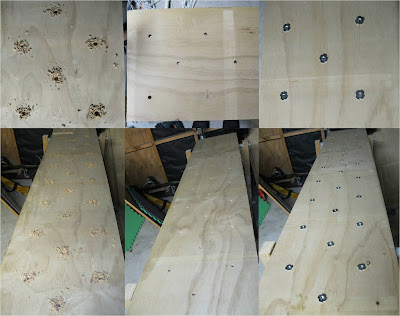 Once the first sheet of ply was up I could measure and cut the next sheet to fit. This was then drilled and the t-nuts hammered in. Both of the sheets were screwed in with large gauge screws that go all the way into the rafters. I think I have spent about $30 in screws to get the climbing wall and campus board up.

Once the climbing wall was up I could set up holds, originally I put the holds randomly but I have since moved them to be spaced in several different positions for doing pull ups.

The wall stayed like this for several weeks until I got around to buying some framing timber ($20 length) to run up the back of the two sheets. I then added the sheet which would be my campus board. I used more 20mm by 50mm off cuts from work. These were cut into 400mm and 800mm strips. The 400mm strips were doubled up then wood glued and screwed onto the ply. These are on super tight and aren’t going anywhere. The plan was to have some more single strips on an angle going up and down the sheet but the horizontal section is so hard I can only manage a few seconds of hang. So the second half of the campus board is on hold for now, either until I get stronger or until I decide how I will fill the other side.
I am still working on the hanging section of the wall and the peg board (a lot of work has gone into this, should be a lot of fun when it’s done).

Note: I now have a post up about my training with the hangboard