So I finally got around to finishing my peg board, I’ve been posting photos of the progress for long enough on facebook. This is a continuation of my rockclimbing wall/hang board, using the pieces of plywood from that project. I first saw a peg board in action in a video by Jim Bathurst from beast skills, it looked really cool and I filed it in the back for my brain for when I had the plywood and time. And when I got given the two sheets of ply I knew what I wanted to build.  I made lots of mistakes on this project which is why it’s taken so long and I’ll outline all of them that I can remember so that you don’t have to repeat my mistakes.

I started with two pieces of ply, 400mm by 2400mm (I cut these from a full sheet of ply costing about $80NZ yielding 3 strips). I glued these together with ‘no more nails’ wood glue and let the glue set under the weight of my sandbags and kettlebells (Note: I also sourced a piece of 8mm ply as the backing once all the holes were drilled, this was glued on after finishing the holes). Next came a series of mistakes.

Looking around different sites on the net I found several people suggested making the holes 30mm and the pegs 28mm, I wanted mine slightly bigger and tighter so I bought a 32mm auger bit and 32mm dowels. The problem was that my cordless drill was not strong enough to run the 32mm bit through the ply straight off so I decided to drill a pilot hole with a 10mm auger bit. The holes were drilled 200mm apart, one line in the centre then 80mm up from the bottom and down from the top.

The problem came then I tried to drill through the pilot hole with the 32mm drill bit. Since it has a small cone shaped tip to start the hole the large section of the bit moved around a lot before finally biting in and getting going, this made a mess on the board (really it wasn’t so bad but I’m picky). Also once the bit broke through to the other side it made a mess of the other side to (again I’m just picky). So I did my best to keep it looking good by drilling from both sides which didn’t quite line up exactly. So following this I had to clean up the holes with some drill bits used kind of like a dremmel to shape things, I don’t know what they are called but it took ages.

Once all the drilling was done, which took a long time since my cordless drill could only manage 5 holes before running out of power, I could test out dowel I bought, it was too small. The dowel moved around too much from my liking so I took it back and swapped for the next size up, 35mm, which was too big. At this point I put the pegs in the “later” basket; I glued the 8mm ply to the back, and mounted the board on the wall in my garage. First the two 2x4s were screwed to the wall, then the board on top of that, it’s super strong and feels totally safe. Finally, I cut 4 pegs at 200mm each (from the 35mm dowel) and sanded down the ends to fit into the board. I like to have spares which is why I cut two extra. 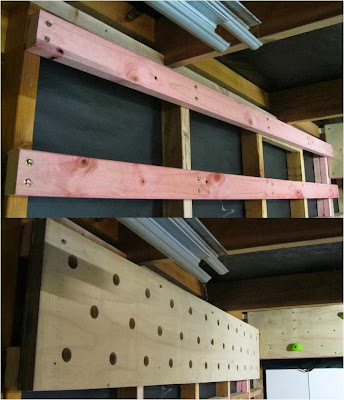 It feels great to have the board finally finished. It’s really hard and fun to use and will be great for training for the one arm chin ups. This project probably took 20 hours or so, due to all my mistakes. I suggest buying or borrowing a powerful drill; it will make everything so much easier. I’m happy with how it’s turned out. I would probably do it again, however I can always take it down and bring it with me if I move, maybe in the next garage I might have the height to mount it vertically, or at least on an angle. 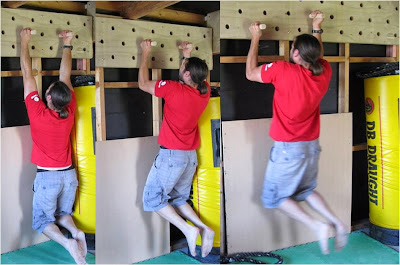