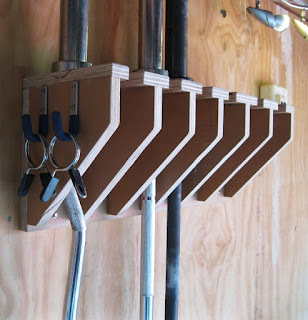 I’m currently storing a bunch of gym gear for a friend while his house is built, but I also figured once I have to give all his gear back I’ll then buy my own. So I decided to start building some stuff for storage.

The first thing I built was a barbell rack. I’ve made mine to hold up to six barbells, one of which being a fat bar. This is a way better option than the previous floor storage system. Originally I was planning to build something like the Rouge gun rack, but found pictures of this style of vertical rack on pintrest. For me the vertical rack is better and it take up much less wall space encase I was to put something else next to it later.

I don’t have any construction pictures so here are a few notes on how I made mine.

-The holes for the barbells were drilled with a 30mm hole saws (50mm for the fat bar). I then used a table saw to cut one side out so that I could slide bars in. A jig saw or circular saw would work fine too.

-The overall dimensions are approximately 200mmx200mmx600mm. The first hole (for a barbell) is 50mm from the end, then each barbell is spaced 100mm apart (top the centre of the hole). The last two barbells are 150mm apart to give extra room if I ever get something like a football bar 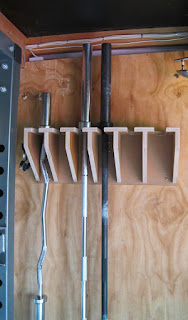 -I wasn’t going to brace between each barbell, but changed my mine after it was built, I think bracing between each is necessary.

-Be sure to screw into a stud, or two if possible with large gauge screws, I could easily load 120kg worth of bars onto this rack.

Thats really all there is to it, fairly straight forward, I used scrap plywood from work, but if I bought half a sheet of ply I could have built two racks for $40.

The ezi curl bar isn’t mine and I don’t do any body building however I might buy myself one, I found it really good for doing some reverse curls when I had some elbow pain from grip work.
Posted by Blah at 14:05