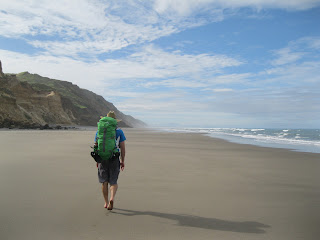 Inspired by wild boy I decided to hike part of the coast line. I choose somewhere local and not too remote, but somewhere I’d never gone before. I planned a section that should take a day or two and planned for two days. It was approximately 18-20km and mostly open beach, with a couple of sections that would be under water at any time other than low tide. I checked this all out with google earth to see what I was getting into, check the tide times to give myself the best shot and organised my drop offs and pickups. To be fair I organised a pretty simple section of coast line

The first half of the walk was probably the easiest, flat beach, no rocks or sections of cliff to work around. I took off my shoes and walked bare foot for the whole walk (this was a mistake but more on that later) About 4-5km from the start I saw four goats, one would have taken a rifle to get, but I think the other three could have been taken down with a bow or cross bow. I enjoyed almost all sections of the hike; this section was good because it was an easy walk, lots of cool stuff to take photos of and nothing stressful. 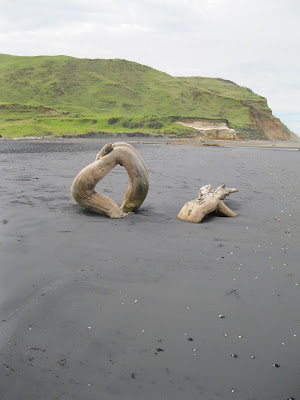 About half way through the hike I reached a section that I was going to have to get into waist high surf to get passed. The hills around this section were really steep and so it was going to be a really long and hard round trip to go over the cliffs. The surf on that day was probably the calmest I have ever seen this part of the west coast. If it wasn’t so calm I would have never got into the water while out there alone. So I walked in waist deep, but it was still a little scary when swells were up to my arm pits and just taking me off my feet. Also wearing a pack made it difficult as the waves hit my pack. I made it around that point just fine and it was the most difficult section of the hike.

After that the hike was a little more varied a few small rock areas to climb over and around which was fun. I stopped for lunch and took a 40 minute break to rest my feet. Now comes one important piece of advice - print off a map. I didn’t print off a map from google earth, so I didn’t know how far I had gone. If I had known I probably would have taken it slower or stopped earlier. But not knowing meant I pressed on, encase I wasn’t as far as I had hoped.

I finally got to a section where I could see para-gliders and vehicles (trapped by the tide). I asked how far to Kariotahi and was told 20 minutes, if I could make it around the rocks. The time was 2:30 so I figured I might just finish the walk and get picked up a day early. The other option was to walk back the way I had come to find a quiet spot to set up camp, but at theat point this option wasn’t so appealing. The rocks were easily passed, again due to the calm surf.

At 3:30 I was at the beach parking lot, 7 hours after I had started, my legs were getting sore but I had done it. I wasn’t till that night that I regretted walking bare foot, my toes were killing me and I could barely walk. What happened was the ball of the foot sinks into the sand, so the flexion of the toes is much greater than normal, so 18-20km of extra flexion was well beyond what I have ever asked of my feet. So the lesson is don’t walk so damn far bare foot on sand. If I did it over again I would probably walk the second half in shoes to save my toes. This really reminds me of what Katy Bowman talks about, that we are what we repeatedly do. If I want to be able to walk 20km on bare feet on sand without pain, I better put the time in to building them up first.

Edit: I just found one more casualty - my lighter got wet and rusted. 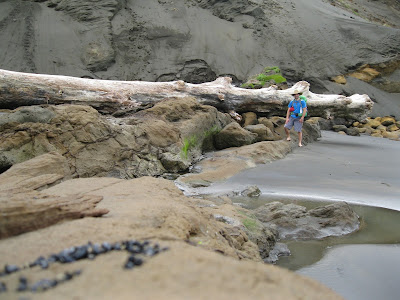 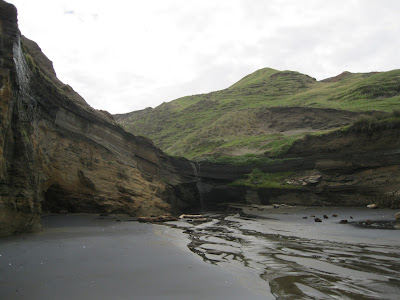 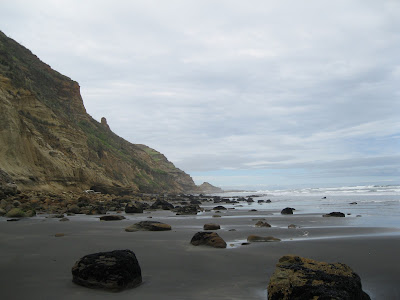 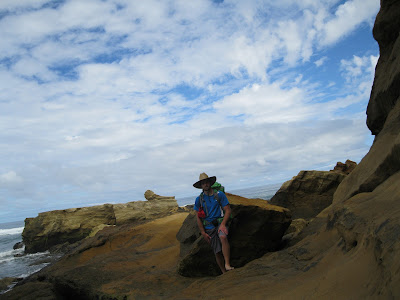 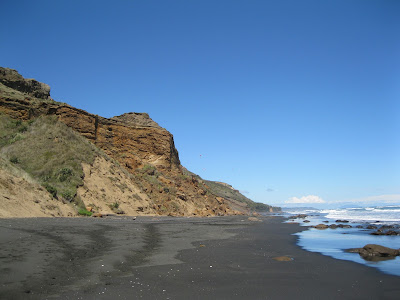