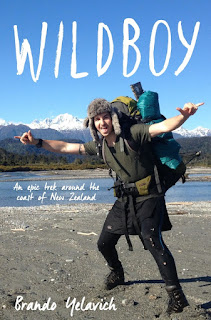 Wild boy is the story of Brando Yelavich, a young man without control over his life, drugs, alcohol, no job etc who decided to walk the entire coast line of New Zealand (inspired by the movie ‘Into the Wild’) in order to regain control of his life. The walk would be over 6000km; which he thought would take him 6 months and it ended up taking 600 days. The book is ghost written due to his dyslexia, but it’s written in his words from the why he got started, and his whole journey to the end.

Over all I really enjoyed the book, it’s simply written and could probably be read in a day, quite fascinating and inspiring. It was interesting to see the different types of land he covered, beach, bush, cliffs, front lawns, ocean swims, kayaking etc. Also the type of food he ate along the way, birds, goats, fish, shellfish and a little bit of seal. It seems he had a varied and healthy diet throughout the trip (mostly paleo, without calling it such). The story of someone with few starting skills in also interesting the way his skills slowly collect, develop and change. To me the book was an interesting and easy read which I quite enjoy; I like the story of adventure and getting back to nature that flowed through the book, but wasn’t push onto the reader. The only flaw I found was that the black and white pictures in the book were of poor quality, but the colour photos were good.

The following criticism is probably due to my personality, but I wish the book had more details (its nearly 300 pages so it’s a pretty good length already). Personally I would have liked to know what gear he took. He stated his pack was 50kg when he started, but of what? He started with an air gun, but later was using a cross bow. I like to know when and why he gave up the air gun for the cross bow, what brand it was and some more details on his hunting. He talked a couple of times about sending gear home he wasn’t using, I’d like to know what gear that was. He also apparently put on 20kg, so a little more information on that would be interesting too. I’m rather scientific and like to know these things, but most people might not, so it’s not really a down side of the book, others might find lists like that boring, or the hunting distasteful. As for more details in generally, the trip was 600 days and details are easily lost over time.

The book has inspired me to do some more hiking and in particular a beach hike, I hope to write about it soon. The book is quite good to read while thinking about paleo diets, ancestral fitness and generally finding adventure.
Posted by Blah at 20:00