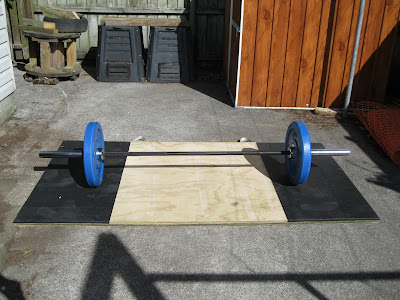 This may be wordy but bear with me, I did all the back and forth in my own head and made some mistakes so you don’t have to.

Before I get started this platform is less than ideal, because it’s going in a less than ideal area. Ideally my platform would be indoors, twice as long and another sheet of plywood thick. However I don’t have to overhead space in my garage for a lifting platform so it has to be built outside. I’m also short on outdoor space so I have to be able to store away my platform. So clearly a 2.4m long platform is out, and a three layers thick platform is out (too heavy).  So this is what I’m left with.

Now for the why. I have been interested in Olympic lifting since very early in my fitness journey. I got even more interested when I started listening to the Paleo Solution podcast with Greg Everett. The more I learnt about training the more Olympic lifting came up for being the best explosive strength builder. Not that I finally saved up the money for a set of bumper plates and Olympic lifting bar I needed a platform so I don’t damage the gear I worked hard to buy.

As I outlined above most platforms are built with 5 overlapping sheets of ply wood but I wasn’t going to be able to move this. So I bought one sheet of 19mm and one sheet of 15mm, both treated. The 19mm is for the bottom and since the mats I could source are 15mm the top sheet is then 15mm ply. The rubber sheets were 1m x1m so they had to be cut and joined, I’ll talk about that more later.

Now I could have left the 19mm sheet at its full 2400mm but cutting it down to 2300 gave me a more useable off cut from my squares of rubber. Looking at the platform with a barbell on it I should have left the sheet 2400mm, but it’s not too big of a deal.

I had a lot of back and forth with myself over whether the centre sheet should be 1200 or smaller (1100). Wider gives me more room to wander and get my balance, but narrower allows more room for the plates. Then I found that Greg Everett builds his narrower than 1200 so I went with 1100 wide. I think I made the right choice.

With the 19mm sheet cut down I measured where the centre sheet would go and measured out where I would put some lifting straps. These were from a damaged strap we use a work; they are rated to 1000kg. I glued these down with no more nails (brand) and having measured them I put a few screws through the top also. These straps allow for easier moving of the platform. I would not use them as anchors for bands. As an aside I didn’t organise anything for anchoring bands, but I’ve got some ideas I might try, though I don’t think that I really need to get that fancy with my deadlifts. 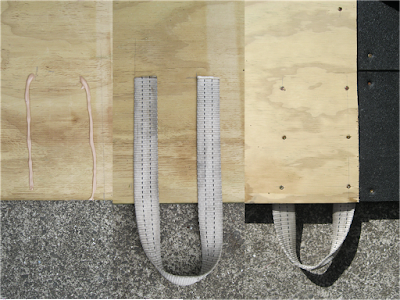 Now I was left with 600mm either side for my rubber sheets. I cut each down to 600mm. If you can, cut on a slightly backwards angle so the top buts up nice and clean with the centre sheet of ply. I then used one of the 400mm off cuts cut down to fill the last 200mm.

As I said before I could have cut down the whole platform to 1m, but I decided it was safer to have a longer platform with joins in the rubber than simply a shorter platform. If you can source longer rubber matting then that’s even better.

I screwed everything down with 25mm screws (I got internal screws by mistake, spend the money and buy stainless steel). I chose not to glue anything but the straps just encase anything gets damaged it easy to replace. I’m also not sure if the heads on the screws I used is wide enough. I may need to add a washer to each screw. 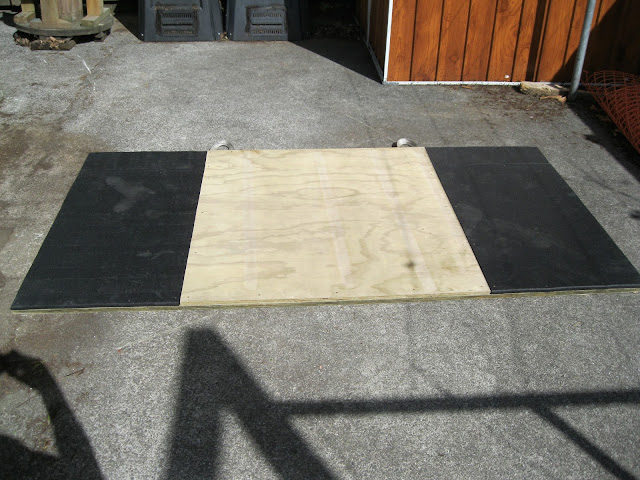 All finished the project took about half a day and less than $200 NZ, when most pre built platforms cost $1000. From a first quick use, the bar can bounce around a bit so I’ll have to guild it down as safely as I can which is good practice anyway.

I’ll update any changes I make and how the platform holds up.

One last note on the placement of the platform, I have modified the clothesline so that I can take down the closest line easily and move it out of the way while lifting.