Part one is here, and part two is here

The gear I used and some thoughts on gear.

I had some questions about doing a gear post and what my pack weighed so here goes. My pack weighed 21kg all in at the start of the hike. This is 3 litres of water, food, phone everything. As for my gear I think I’ll start with my shoes and make my way up.

I wrote previously about how I do all of my hiking in vibram5 fingers and I really wanted to do this hike in my five fingers too. However my pack was the heaviest I’ve ever hiked with and having walked the Tongiriro Crossing before (in five fingers) I knew the terrain would be rocky and loose. I was also cognisant of my broken toe and the injury I suffered walking on thebeach and up Mt Pirongia. In the end I decided the terrain in combination with the heavy pack would be too much for my feet to handle. I knew that extremely sore feet would take the fun out of the hike and could even force me to drop out. So I decided to wear my zero drop trail running shoes I have written about as my daily wear shoes. Once I had started on the track I know I had made the right choice. I’ve mentioned before how I don’t need ankle support etc so I want go over than again. I will say I was very happy with my shoes and will likely stick with the brand for the foreseeable future. I’ll still be doing most of my hikes in five fingers, but for the more mountainous stuff I think shoes are the safer option.

Moving up to my socks. I bought some long injinji compression socks for the hike, which I also wanted to test out for running. Long story short, I ended up with a white pair and a purple pair instead of black. I found these socks to be great, I’m sure they helped shift fluid in my feet and ankles. I might do a full review of them once I’ve worn them running (Review here). The only issue I found, which was not at all the fault of the socks was that during the river crossings I got a lot of silt in my shoes, which worked its way into my socks. So one big suggestion of mine is to bring a fresh pair of socks for every day, it makes a huge difference.

Now for my pack. It is a 50 litre Kathmandu pack which I bought on sale for $200, they eventually went for $180 on clearance. It has been the right size for me, fitting everything I need, without any space left to pack unnecessary items. If needed I could strap some stuff to the outside, so in winter conditions a 60 litre pack might be necessary, but for what I do its been prefect. 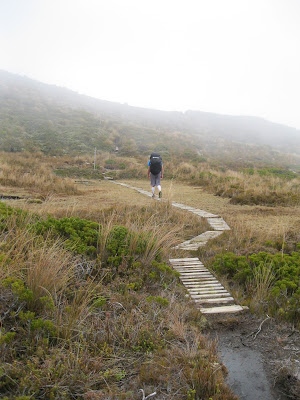 Now I’ll try to go through the contents of my pack, as I would pack it. A 3 litre water bladder goes in first. I find on most hikes this is enough to hike a 5-8 hour day, longer and I’ll fill an extra litre bottle. Next in is my one man tent weighing 1.5kg or so. I bring along a ground sheet I made from a cheap tarpaulin which weighs next to nothing. I also bought a larger trap to go over both tents (for me and my hiking companion) encase of heavy rain. My sleeping bag I think is a -8 °C so it’s a little over kill but I just unzip it a bit. I also use a silk sleeping back liner which I can wash more easily than my sleeping bag. My sleeping mat is a ¾ length self inflating mat which is fairly thin. I find it quite uncomfortable so I might upgrade to something thicker but light weight.

Next I have my clothes in a dry sack. I bought 2 pairs of thermal tops, 1 pair thermal long johns I didn’t use the extra thermal and long johns but they were good to have just encase. I thought it had packed an extra pair of shorts but I hadn’t so I only had one pair the whole way, no big deal though. I had two t-shirts, one for while hiking and one for at camp, my hiking one stunk but that's life. I’ve already mentioned my gloves. I also packed a hoodie which came in handy, but was difficult to get dry once it was wet.

Food and cooking. I have a light weight cooker, gas bottle and two pots, the small one I barely use so I could just leave it behind. One thing I am really glad I bought was a kettle, it makes boiling water so easy and adds very little weight. For breakfast I have coffee sachets which I use condensed milk with (so tasty even if milk powder is lighter). To eat I have oats with a serve of protein powder. Lunch and snacks are jerky, dried fruit, and a can of tuna. Dinner is a dehydrated backcountry meal, these were always really good. On shorter hikes I’ll carry a can of beans, sausages and cheese. This is followed up with a hot chocolate and condensed milk. I also carried an extra days food just encase. Now this food isn’t super paleo, but oats don’t give me any issues and I choose either gluten free meals, or meals which don’t have a lot of wheat (no pastas), which I seem to handle pretty well.

Extras. I carry a small first aid kit, water purifying tablets, small repair kit, duct tape, tic tac container with some salt (to try to prevent cramps), headlamp. I carry all sorts of little extras, some worth bringing, others I should probably leave behind, but that’s an ever evolving process. One thing that was handy this time was two clothes pegs I added to my pack, I was able to dry some clothes while I walked. If I wasn’t so tired at the Rangipo hut I probably could have strung up a line to dry clothes. Also a little cloth is really handy for drying pots and hands etc. I always bring two rolls of toilet paper, its more than I need but is helpful if someone forgets, and I always leave one roll at the last toilet; it lightens my load, and might just make someone’s day. I carry a whistle on my pack for emergencies (three sharp whistles is the signal), but it’s a farm dog whistle and not everyone knows how to use one so I should probably get something anyone can use.

Wet weather gear. I carry a gortex jacket with me which comes in handy as well as a pack cover. One thing that broke on me this time was a small dry sack which I keep my phone and map in. It got a small hole in it so I’ll have to get a thicker one for my next hike. One thing to note, I kept one of my maps in my pack pocket at the front and it got quite wet, so best to laminate your maps, or keep them in a dry sack.

Camera. Simple point and shot which I carry on my hip for easy access.

There are a lot of things I have forgotten or left off, but this gives you a bit of an idea of the gear I’m carrying.
Posted by Blah at 14:47