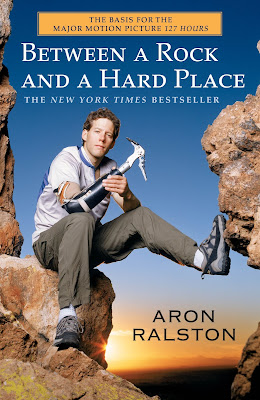 This is another one of my book reviews which isn’t current, but I still wanted to read and review. I had seen the movie and heard a little bit about the book so I decided to give it a read.

Between a Rock and a hard place is a kind of auto biography by Aron Ralston which focuses on the canyoning trip which his arm is trapped by a bolder with little hope of rescue. He amputates his arm, rappels down 60 feet, and hikes several miles before finding rescue. The book also takes a look at some of the events which lead him to canyoning solo and also interesting and amazing experiences he has had in the outdoors.

It is easy to think that a book about a guy pinned by a boulder for 5 days would be really boring but the book is exceptionally engaging and has a structure which breaks up event of him being trapped. The chapters alternate with one chapter being the events of the canyon and other being some past events (or later, events of the search). The chapters while trapped are interesting and go through exactly how he became trapped, and then though his process of trying to escape, how he survived, kept comfortable, and tried to stay awake. It describes to the reader how he’s feeling, his plan and execution of an idea, what fails, how he tries again and again. It is interesting, in-depth, and keeps you attached to the story. The chapters set in the past are amazing tales of extreme outdoors experiences, stalking bears, avalanches and extreme endurance events. They are great stories in their own rights but help to paint a picture of the man, what he’s capable of, and what drives him.

The chapters of the past show an extremely capable man, who is not particularly risk adverse. He recounts several instances he could have died previously and it goes to show that an event such as what happens in the canyon was just waiting to happen. For me it reinforces the need for safety, but doesn’t put me off soloing. Nor did it put him off. One could be critical of Ralston’s extreme risk taking behaviour, often putting others in harm’s way because of his own need for adventure, however I believe it was more a case of testing his limits and learning from his mistakes (coupled with an extreme personality). I think he pushed the limits for a test and for thrills, which comes with risk. This should serve as a warning to everyone that these things can have consequences, and we must be ready to meet them.

The book also has some photos in the centre; compete with selfies of him trapped, and his severed arm. This speaks volumes to how strong he is that he can be trapped for five days, extremely dehydrated, cut his arm off, but stop to document it.

The writing was very good and extremely descriptive. It took the reader into the situation, on the mountainside with him, or trapped with him. Particularly when he cut is arm off and is finally free is frighteningly well described.

I would strongly recommend reading this book, it is a well written story of adventure and the strength of human will; while also being a cautionary tale of both planning and risk taking behaviour. It should make to stop and think about what you are going to do, and take steps to plan for your safety in the future.
Posted by Blah at 15:32