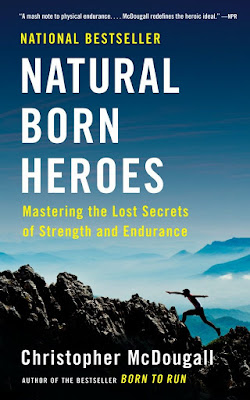 At this time I have not yet read McDougall first and better known book ‘Born to run’ so I didn’t quite know what kind of book I was going to be reading. From what I had seen of the book (Natural born heroes) it seemed like this would be a kind of Natural Method, how to manual. I was expecting sections on natural running, strength, parkour, knife throwing etc. Not as in exercises, sets and reps form, but as maybe as a story of how each is part of the natural method, how it is done and how one can integrate it into their training. The book was really nothing like what I was expecting.

McDougall tells various side stories on ancient Greece and Crete, as well as stories of natural method training. He also tells side stories of his own training in MovNat with Erwan Le Corre, parkour in London, knife throwing and fat running endurance running. These stories were quite interesting, and they were what I was expecting to make up much of the book, with follow up sections as how to guilds and how one might fit these into their own training, but there was little to none of this. This isn’t to say that it was a bad book, just not what I was expecting.

The main story of the book was interesting and engaging and kept me reading. The mix of historical story, with a very personal look at the people involved was a nice mix. The side stories of the past, or McDougall’s own training was a good addition too, but I felt as if they didn’t quite match up as well as they could have to follow from one to another.

In all, it was a good read, an interesting style of story and history and autobiography in parts. Despite expecting something else it was still an interesting book, maybe not quite my style but I enjoyed it anyway.
Posted by Blah at 15:06