Into the wild by Jon Krakauer 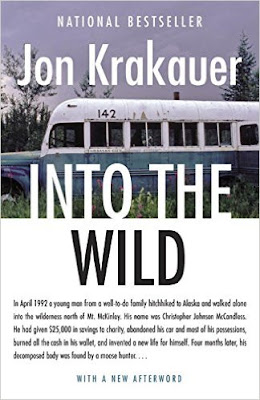 I first saw the movie of the same title, and didn’t know the story so it came as quite a shock. The story is of a young man (Christopher McCandless aka Alexander Supertramp) who gives away his life’s savings, turns away from his family and spends his life hitch hiking around America. Like most who see the movie I was inspired to do some hiking as the movie casts the story in a romantic and inspirational light. The book is similar though more raw.

The book is really interesting in that it expands more deeply into the motives of Christopher, the type of person he was and some of his home life. It paints an even more confusing story of the young man that the movie does.  It helps to read the book to get this extra information, though it brings the reader no closer to understanding the motivation behind the man’s journey. It is worth noting that the book still doesn’t give a complete story, and attempts to fill some gaps, particularly in Alaska. Supertramp’s diary of the time was numbered, often consisting of only one word entries. Krakauer has extrapolated from these in a way which may or may not be true. This makes for a more coherent book, which is more or less true, though may not be considered strictly factual.

Now for the spoiler, there seem to be two camps on Supertramp, some find him to be an inspirationally tale of someone searching for adventure but getting more than he bargained for, or maybe just got out of his depth. While others see him as overconfident and arrogant walking into the wilderness with no skills, no real plan, improper equipment and ultimately dying needlessly. The movie makes many people lean towards the former. I however side with the latter.

As a quick aside, the movie makes it seem like he ate a poisonous plant by mistake while Krakauer later wrote an article claiming Supertramp may have eaten the correct plant, but what most do not know is that while this plant is generally save, when people are underfeed and working hard it becomes poisonous to the system. Sadly the way I see it, either way he starved to death because he was not properly prepared. Either way, he was already starving and poisoned or not he was going to starve to death. Many people, particularly Alaskans were angry about his death because it was so needless. I feel the same way because so many find his story a source of inspiration. But it’s a story of being intentionally ill prepared leading to death.

There is a line in the book “a challenge in which a successful outcome is assured isn't a challenge at all “. This struck such a chord with one reader they underlined it (I borrowed the book from my local library). While this may be true, having the proper equipment, even just the addition of a map, still would not have assured a successful outcome for Supertramp, but it would have been a more humble sign, a greater respect of the danger he put himself in.

The book is a good read; Krakauer is quite a good author so the odd personality of Supertramp doesn’t affect the reading of the book. I suggest giving it a read to make up your own mind; maybe you’ll think I’m being far too harsh.
Posted by Blah at 14:07