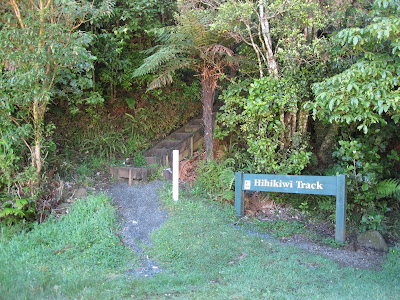 
The DoC website listed this hike as 4-6 hours, so I thought it would be a reasonably easy hike, nothing too strenuous. I was even more at ease when I saw the sign post for 3 and a half hours to the hut at the start of the track, little did I know what we were in for.

The track started off quite easy nice track; gentle climbing and then we hit the mud. Long, wide sections of up to knee deep mud. The elevation gain remained fairly stead, but easy but the really difficulty was the mud. As much as we could we kept to the outside, and just off track to get around the mud but eventually you give up and reside to the fact that you are now wading through mud. There were sections of board walk, but they were few and far between. I probably took 3 hours to reach the lookout, and at least half of that would have been in the mud.

On the way up we saw a goat control hunter and had a chat to him, the previous day the team had killed 65 goats and would kill about 1000 in the season. Goats are an introduced pest which destroy the habitat of native birds, and prevent the re growth of a lot of regenerating native bush so however you feel about the killing of animals something has to be done about the goats.

We also meet a solo woman walking the Te Araroa trail North to South, she seemed like she was having a hard time with the mud, and we didn’t know at the time she had just passed the worst of it, and we were heading into it.

After the lookout was very easy going, the whole way to the hut was board walked. I plan had been to head from the hut over to the Cone to take some photos. I though the Cone was 30 minutes away, but I realised that it was an hour. Knowing that I would be an hour there and an hour back in more mud, I decided to give it a miss. It had only taken us 3:45 to get up to the hut, but the mud had sapped my energy for any more hiking that day.

Had a relaxing afternoon chatting to people as that came up, the hut ended up quite full and it was great talking to different people, which direction they had taken, plans for the rest of the summer etc. The hut is great, nice big kitchen and dining area to cook and hang out in. The one down side was there weren’t any of the usual National Geographic’s or Time magazines one normal finds to read in huts like this so it was a bit of a long afternoon since the hike was so short. There is also a really well set up area for tents, and a cooking area for campers so I like to set up there with some friends some time.

The walk back the next day was much easier. We knew what we were getting ourselves in for with the mud, and had better strategies for getting around it, and finding better foot placements in shallower sections of mud. It only took 3:30 to get back down the Mountain.

I like Mt Pirongia, it has a great hut set up and amazing views but all the mud makes it difficult, no doubt I’ll hike up again, but maybe not via the Hihikiwi track. As one person put it, Pirongia is ‘a vertical swamp’. 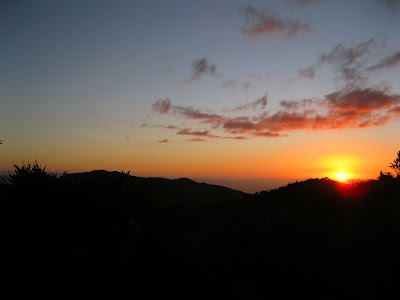