Attempting Round the Mountain – Taranaki 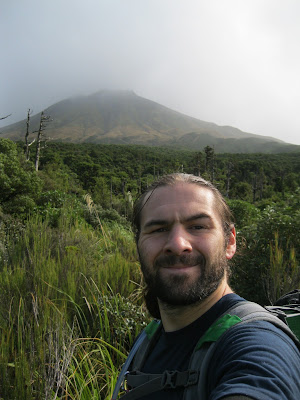 I say attempting because we didn’t make it around Mt Taranaki this trip, I don’t think we even saw the mountain at all. This is because we were trying to walk the track during an Ex Tropical cyclone after some of the wettest weather the country has seen.


The plan was to walk around the mountain in four days, staying in the North Islands highest DoC hut, hiking mostly higher tracks. This wasn’t to be. When we got to the DoC office at Dawsons falls we spoke to a warden about our plans to go up to Syme hut (highest in the North Island) and carry on around the mountain. We were quickly informed that there was forecast to be 130kph winds that high up the mountain and the safety limit for hiking was 69kph. With our big packs weighing 20kg each we would likely get blown off our feet. And that was just the beginning. We were told that we may not make the hut on the next day’s walk; we could get blocked by a river 10 minutes from the hut if the rain were to worsen (which it did). And if by chance we got past that river, there were several more on the next day, any one of which we could find ourselves unable to cross. At the time we said we would risk it, we had the gear to sleep in the bush if need be.

So we set off from Dawson’s falls to Lake Dive hut, via the high track, hoping to stay out of the mud on the low track. The track was very well maintained, but very wet. As we climbed the visibility lowered, the rain increased, and the temperature dropped. Other than the weather the walk was great, I’m sure there are amazing views, not that we could see further than 50m for much of the time.

At the highest part of the climb, approximately 1500m the wind was very strong, and basically at the limit of safety, so I can see why we were warned about going any higher. This was also the coldest section of the walk, the rain was pouring down hard and cold, which wasn’t too much of a problem, except that it was running down my jacket, onto my non water proof gloves. Every few minutes I could make a fist and squeeze out the freezing water. Eventually the gloves were doing more harm than good and my hands warmed up after taking them off. The other issue was the water in the track; 100mm in most places, up to about 300mm deep. It seemed like every other step flushed new cold water in to freeze my feet. There was no getting away from it. Eventually the soles of my feet were numb. It’s an odd, uncomfortable, heavy feeling to hike on numb feet.

Eventually we made it to Lake Dive Hut, a very nice hut, all to ourselves, seems no one else was crazy enough to hike during a cyclone. We got the fire going, but never really got it roaring. It warmed the hut up well, but wasn’t enough to properly dry anything. We managed to get a view of what I believe is Fathoms Peak during a break in the clouds which was cool to see. Overnight the storm really rolled in, driving wind and rain almost all night. This vindicated the decision to turn back, and abandon going around the mountain. With the heavy rain the rivers would definitely be up, and we may or may not have gotten across. I didn’t want to get almost to a hut only to camp in the wind and rain and have to walk back the next day. Even more so I didn’t want to put us in the position of trying to cross a river that we shouldn’t. It would prove nothing to get across, whether we make it across a swollen river or not, it’s still a bad call.

The next day we spent some time chopping fire wood for the hut before setting off back to the car via the low track. Wet again, but not particularly muddy the track had a few wind fall and wash outs but otherwise was very well maintained. I was very impressed with the quality of the tracks. Both the low and high track took us 3 and a half hours and we made it back to the car in one piece.

It was disappointing not to be able to do the hike as we had wanted to, but we chose the safe option, so we can come back next year, maybe January or February for better weather. 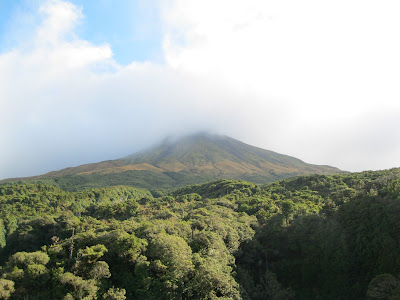