I had a number of friends who wanted to try an overnight hike for the first time so I had to try finding something appropriate. Not everyone had the gear or the inclination for camping so a hut was the best bet and since there could be as many as ten of us, something we could book was the best option. I have been to Crosbies hut before with friends and really enjoyed it. There were also several other tracks up to the hut I wanted to check out. The tracks weren’t too long or too short, and the elevation climb wasn’t anything major so this was a good first time option.

The Karaka tramping track looked like a good option (if muddy), of the many tracks from that area. The track was listed as 4-6 hours, but I planned on 6-8 just to be safe. We got started just after 10am which would give us a maximum of 8 hours of daylight.

The whole first day was light rain, with moderate levels of mud, which didn’t bother me one bit given my water proof socks (More on those next week). The track was otherwise very well maintained, with the second half of the track (the main range) a quad bike track, so very easy going. The climb was very moderate and mostly un-noticeable (to me at least).

This was track was also a good test for my gators, these worked pretty well keeping my socks somewhat free of mud, though I think I will test them out a few more time before I decide if they are worth it or not.

We made really good time for the first half of the walk, but that’s when the times got interesting. One sign said 1:45 to the hut, which was fine, but 45 minutes to an hours’ worth of walking got us to the next sign – 1:15 to the hut. So we were running a little slow we thought, no big deal. But after an hour an 15 minutes we still weren’t at the hut. Then we hit another sign, 30 minutes to the hut. It was partly a let-down and partly a relief. The signs were wrong, but we were nearly there.

Given the rain and cloud we didn’t have a great view that night at the hut, but it had cleared by the morning and we had great weather and views for the whole walk down. The walk took us about 6 hours up and a little less down. I was leading the way, slower that I would usually walk, and stopping every now and then to let people catch up, so I could probably do the hike in 5 hours or less. I would have called my pace a slower walk, not too slow, but I had to be mindful about walking slower than I normally would. It was nice to walk a little slower, with mindfulness and to chat to different people than who normally hike with me. Next time I would maybe swap with someone and walk with the back group for a while, rather than leading the why the whole time. Just something to think about. 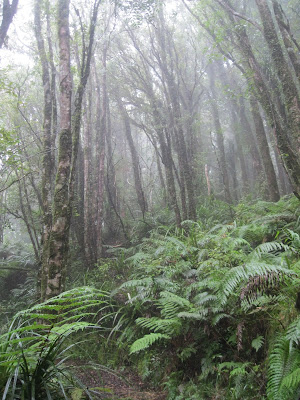 I enjoyed walking with a larger group, leading that way, next time I’d like to do a bit of reading about the track and the area, so that I could talk a little about the area and the history, as much for myself as for everyone else.