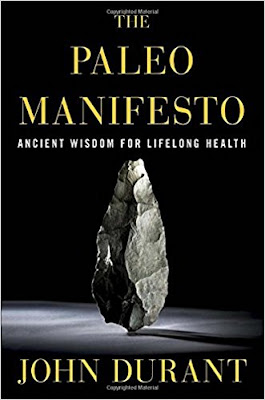 Right off the bat I’m going to say this is my favourite ‘paleo’ book. I can say this since it’s the only one I’ve been able to re-read and enjoy as much a second time. The book points out a lot of interesting nuances I’ve never thought of, or heard about, and not just on strictly ‘paleo’ topics either. The writing style is somewhat informal and funny while getting across the right amount of science. If I was to describe the book, I wouldn’t call it a paleo diet book. I would say it’s a book about how previous humans (and animals) once lived, and all the ways we screw it up.

The book is set up in three parts. Part one being an explanation of where we come from, and where we are now. But not just hunter gatherers vs modern humans; the book explores our animal origins, hunter gatherers, agriculturists, the industrial age, and modern bio hackers. This sets the back drop of not necessarily how we should live, but some boundaries of what we can survive and what we can’t. As well as weather we are surviving, or thriving.

The second half starts to put this into action by taking a look at some of the classic topics of most ‘paleo’ authors, with reference to the timeline set out by the first section of the book. It looks at food, fasting, sleep, movement and thermoregulation. There is a little science, but not too much, lots of self-experimentation as well as comparisons of other culture and time periods. The third section explores both hunting and vegetarianism with a look to the past and future.

Reading this book for a second time is what has got me into thinking about my environment/life style design. Questions of what environment did humans once live in, what parts of that environment were important and why. What variables did the environment have, were they important, do we have them now, and if not how do I add them back in. Thinking about these kinds of questions was an eye opener for me.

This is possibly the book I would suggest to someone who either has read a ‘paleo diet’ book and not been interested, or to someone who is sceptical of the whole ‘paleo movement’. Not because this book has some amazing science that will convince them, but because this book has such a way of laying out the basics. This book isn’t about diet, or convincing people to change their lives. More than anything it lays out how humans have done things so wrong, and ways we can start doing them right again. This book is also a great example of how the paleo movement is not a historical re-enactment, it’s about fining a frame work with which to make informed decisions.

Also worth noting the book references the bible and biblical culture (mostly the Jews) in several chapters. It’s a really interesting topic which I haven’t seen explored elsewhere. Particularly the cultural and biblical rules with reference to the environment in when they arose in, and the problems they may have been attempting to solve. This alone make the book an interesting read.
Posted by Blah at 16:20